Moon has been one of my holy grail games for PS1, one which I desired to own and play, but was just a tad pricey for my liking. Thanks to a surprising, but welcome announcement that Moon is coming to Switch, I finally had my chance to tear this thing open and experience it for myself.

And boy, was it worth the wait. Not totally what I was expecting, but delightfully whimsical.

END_OF_DOCUMENT_TOKEN_TO_BE_REPLACED

R?MJ : The Mystery Hospital is one of the many games to come out of Japan – or rather, stay in Japan – during the rise of the PS1 and 3D graphics that tried to be a “cinematic experience”, blurring the lines between movies and games. While games these days still try to do that for some reason, it was rampant in the PS1 area with lots of hallway walking simulators with ridiculously bad CGI cutscenes and minimalist gameplay (Vampire Detective, Maria, many glorified visual novels, etc, are some derp examples). What resulted were a bunch of games nobody remembers, despite their efforts to be amazing. In reality, were these done because they were easier to do? No real gameplay necessary! Get your brother-in-law Ricky to do the cutscenes, he likes computers right?

R?MJ (what a catchy acronym, but pronounced just “MJ”) is one of the kings of derp in this genre. There may be “worse” games technically speaking, but this one is so absolutely silly and stupid it has become one of my most beloved of the “kusoge” niche. It has been some time since I played it, but hopefully the memories burned into my psyche will help guide me along.

END_OF_DOCUMENT_TOKEN_TO_BE_REPLACED

I am currently on spring break and thus apologize for lack of song lyrics etc. I have been catching up on some gaems! Like, for example, Maria: Kimitachi ga Umareta Wake aka Maria: The Reason for Your Birth. An old PS1 game that took the plunge into 3D as a sign that games needed to be ~CINEMATIC~. Lots of games did this, most of which are now classified as kusoge. Yet when Heavy Rain does it suddenly everyone’s a fan! Tch.

Anyway, this game is indeed pretty derpy on the outside, but fully playable. Because there ain’t much “playing” in the first place! Dayum.

END_OF_DOCUMENT_TOKEN_TO_BE_REPLACED

Posted by keekiyasan on July 21, 2014
Posted in: Game Impressions, PS1. Leave a comment

There comes a day in every person’s life when they play a game that shows them the meaning of the cosmos. This is that game.

熱砂の惑星 aka literally Boiling Sand Planet aka Desert Planet is a unique and completely ridiculous game. When buying it I was expecting the usual derp, the usual gold. However, I got much, much more than I was hoping for from it. I played it with an hombre and we finished it in one sitting, taking about 4+ hours. We couldn’t get enough. What kind of magical game is this?! Well read on, if you dare.

END_OF_DOCUMENT_TOKEN_TO_BE_REPLACED

Posted by keekiyasan on July 8, 2014
Posted in: Game Impressions, PS1. Leave a comment 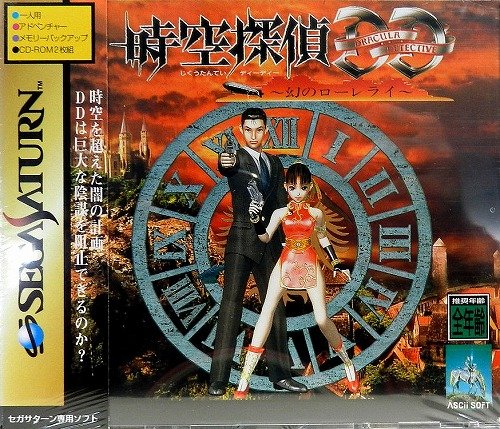 First non-translation post?! Dear lord… what makes the lord even more dear is this game. 「時空探偵ＤＤ 〜幻のローレライ〜」 aka Jikuu Tantei DD ~Maboroshi no Lorelei aka Space-time Detective DD ~The Phantom Lorelei is a JPN-only PS1 game that was released in the prime year, one of the Golden Years of video games, 1996. The “DD” stands for Dracula Detective, effectively making the title Space-Time Detective Dracula Detective. Nice one, ASCII!

The cover of this would make you believe it’s about a suited badass and a Chinese-dress-clad dame who blast fools with their guns first and ask questions later in some sort of gothic castle/country setting. This wouldn’t be the first time you’ve been wrong in your life. Indeed, the stuff going on in the cover never happen in any shape or form, except for the little blimp beside the title, which is actually what the entire game is about.